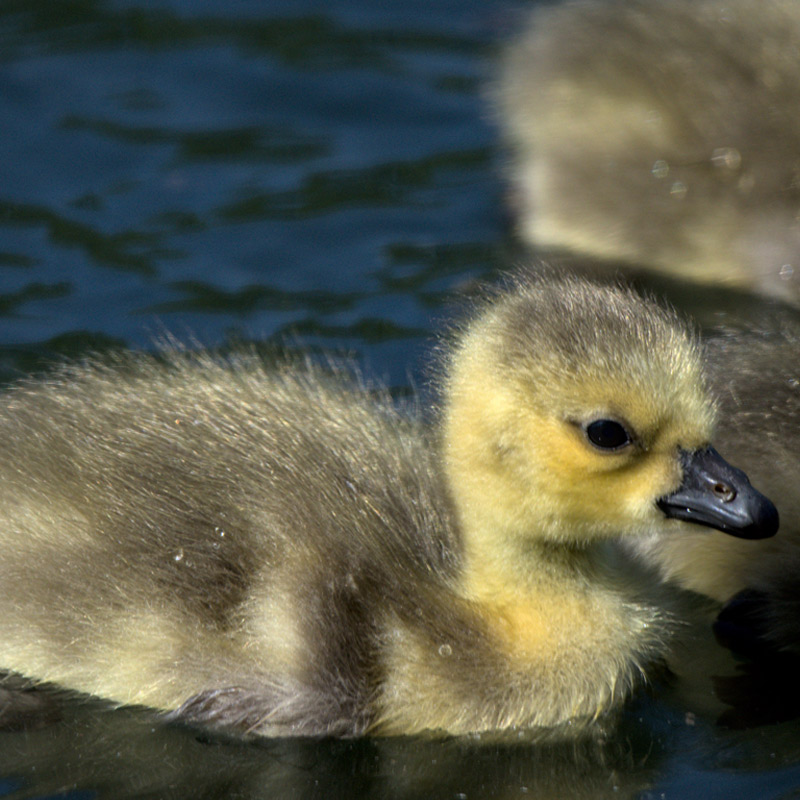 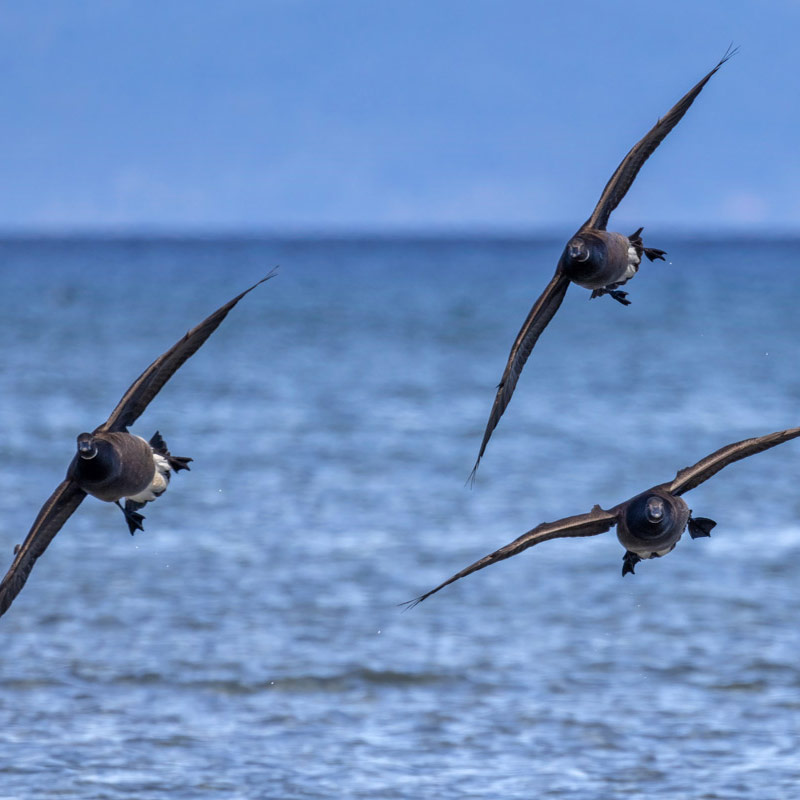 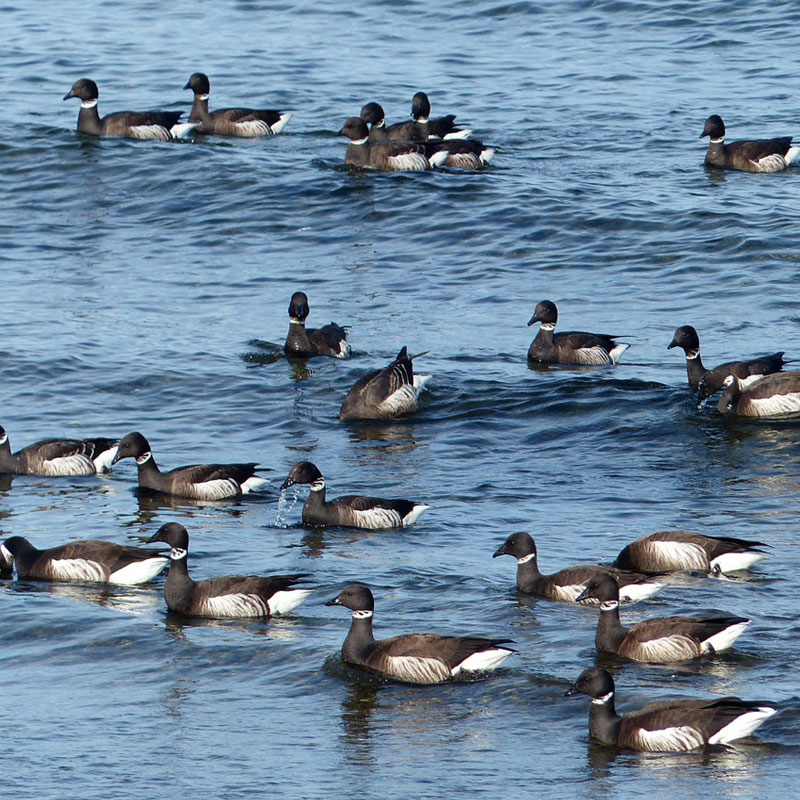 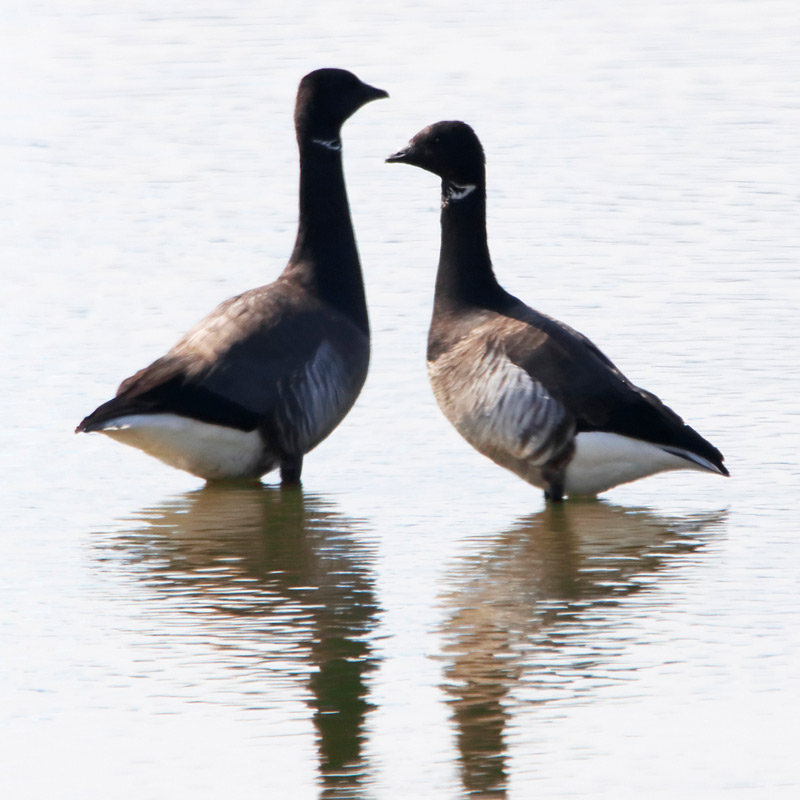 Brant begin to arrive on their Arctic breeding grounds in early May. Already paired, they waste little time in selecting a nest site to lay their eggs. They have only a small window–after the ice and snow have left and before the bad weather returns–to lay their eggs and raise their young. Their nesting success, in part, reflects the health of their staging areas.

The female builds the nest using sedges and grasses, then plucks down from her breast to line the nest. Brant nests have been called the most beautiful of all the waterfowl nests.

When she leaves the nest to feed, the female covers the eggs with the down which serves as camouflage and helps keep the eggs warm. The clutch of three to five eggs clutch hatches in about 24 days.

With an abundance of food and 24 hours of daylight in which to feed in the Arctic summer, the young Brant grows quickly. If the adults successfully defend the young against Arctic foxes, jaegers, and Glaucous Gulls, these little balls of fluff will be on the wing in about 45 days. Around the end of August, the family groups begin their journey to Izembek Lagoon in Alaska.

At Izembek Lagoon, Brant numbers peak around the last week of September and the birds await the Pacific weather systems that will help them on their southern migration. This is a special time when nearly all the Black Brant on the Pacific Flyway are at Izembek Lagoon.

A majority of the birds leave Izembek Lagoon around the end of October and early November. A trans-oceanic flight brings the Brant to their wintering grounds in Baja California. There they spend much of November, December, and early January in the bays, lagoons, and estuaries of the Baja.

Development on the wintering grounds is a potential threat to the Brant that are dependent on these habitats. Here, an oyster farm takes up much of a lagoon that the Brant frequent.

By early January, some birds have begun moving north on their return journey to the breeding areas. Instead of making a direct flight, as they do in the fall, spring migrants work their way up the coast, stopping at bays and estuaries they’ve used in the past. Adult pairs are first to leave the wintering grounds, followed by the non-breeders and last year’s young.

Brant usually arrive in the Parksville-Qualicum Beach area in late February although they don’t appear in large numbers until the end of March. Peak numbers occur about the time of the Brant Wildlife Festival

In late March another wildlife spectacle occurs coinciding with the arrival of the Brant–the Pacific herring spawn. This abundant food source attracts tens of thousands of water birds and marine mammals. Here, the milt or sperm of the herring has given the water a turquoise hue and the waves have whipped it into a foam along the shore.

Pacific herring lay their eggs on the seaweed such as this cluster. The billions of eggs available to the Brant are an important source of protein for the birds as they put on fat to complete their journey to the northern breeding grounds.

During the Pacific herring spawn flocks of up to 3,000 Brant can be found close to shore feeding on the herring eggs. Along with tens of thousands of other water birds you can also find marine mammals such as Harbour Seals and California and Northern Sea Lions. Large numbers of Bald Eagle are also attracted to the spawn sites

In the Parksville-Qualicum Beach area, Brant spend their nights out on the Strait of Georgia. In the morning as the tide begins to drop, the Brant fly into shore to land on the first exposed sandbars. There they carry out maintenance activities such as preening as they wait for the tide to fall.

The Brant follow the tide out, feeding as they go on their primary foods–sea lettuce and eelgrass. The yellow band on the bird in the centre of the photo has an alpha-numeric code that identifies this individual. The yellow colour tells researchers that it was banded on the Yukon-Kuskokwim Delta of Western Alaska.